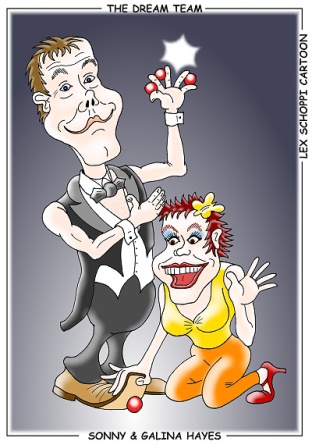 I call this figure
The Dream Team

See this world-class comedy magic duo. Galina literally jumped ‘numerus clauses’ from the Kiev Circus School on the Theatre Academia in Moscow. Shortly after, she won almost every “Miss Magic” title available all over the world. Sonny is one of the most famous comedy magicians world-wide. He studied arts (Bachelor of Arts), too and had global TV appearances. He has worked often for theatre and TV as a consultant and had his own TV show in Britain.

With his wife Galina his art- and comedypotential raised and a worldcareer began. They have been described in the media as “The Dream Team”, so I do in this cartoon.

Sonny, the always noble and shrill dressed, all-dominant great magician, who never succeeds. This guy has class since he is known for his sleeveless tails and shirt but instead attaching great importance on collar and cuffs. Galina is the moving spirit and clown, who is essential for Sonny.

These international highly decorated artists live in Berlin and work much for German varieties.