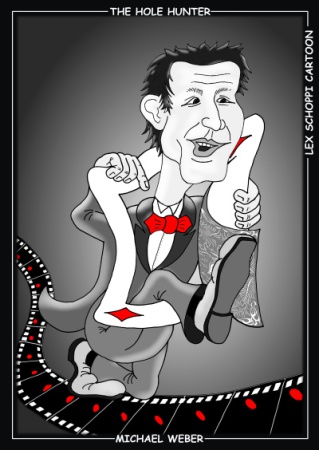 I call this figure
The Hole Hunter

See the American magician Michael Weber! As a consultant, he worked for many Hollywood productions, as a magician he performs for the biggest companies, as a lecturer he shows magicians who is the dare-devil… and now he appears in the specialist periodical „Die Magische Welt“. Since it is me to create the caricatures for the aforementioned, you’ll find him, Mr. Weber, on the celluloid which means everything to him.

Find the salient point on the screen role – which is most probably the talking point in his workshops and catch sight of him climbing through the card. Which does not show the American Bicycle back: I took the liberty of furnishing it with the phoenix.

This cartoon appeared in the trade magazine „Magische Welt“ 3/2011. Find a full page ready to cut it out so that you can hang it up over your bed or behind the closet. Moreover, the journal offers a very interesting interview with him and tricks, tricks, tricks… of course.