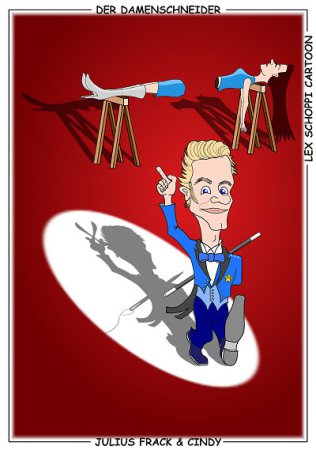 I call this picture:
The mad tailor

Actually, I intended to draw Julius Frack at some remote period. In his younger years, he made a distinguished contest career. He was one of the most successful German magicians from the so called ‘Stuttgarter Schule’. His signature feature is/was the tailor stunt using all imaginable dressmakers equipment. The valiant little tailor turns simple cloth to a dress, which comes alive as a real woman.

His success made the world his oyster. Then he vanished into the thin air… merely to rise like a phoenix in 2008. To the surprise of the entire German experts, he competed in magic competitions as illusionist.Only a few gave him credit for this due to his close knit tailors brandmark. But he disabused all: he became World Champion of Stage Illusions.

In his latest illusion – thus his World Champion routine – his assistant Cindy floats on two chock blocks, he saws her in half and walks through her. What an effect!

Inspired by this, I drew Julius Frack as illusionist with a wagging finger. There is his brandmark in the shade, he cannot get rid of, now more than never. Indeed, he saw the floating woman with his scissors in two.

His wand turns to needle and thread in the realm of shade, of course. Thanks for making it so easy, Julius. As a ‘simple’ tailor, I would have kept you waiting. But like this you turned into my favourite headline picture.