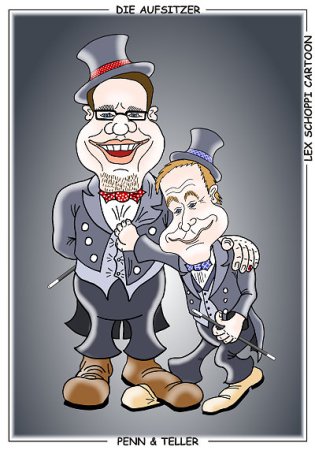 I call this figure
misleading frauds

Americas leading scandal-magic duo “Penn and Teller” fascinate with their so called misleading frauds. This is a pseudo-explanation of a trick, which contradicts itself in the course of the show. They fool the audience regularly and in the goriest way. They genuinely saw a woman in half and leave her viscus on the stage behind or they burn the Star-Spangled Banner in the White House. They run their own TV show called “Bullshit”. They are firmely established in the US showbusiness.

The giant Penn is a raconteur; the small Teller generally uses mime while enchanting as much as he can. Both of them are posing in my cartoon, Penn more solid then Teller would have wished. They are famous for their identic grey clothing and Penns red nail.