This cartoon is part of the serial “Theatre at the headquarter”, I call it the
Admirals Derby: 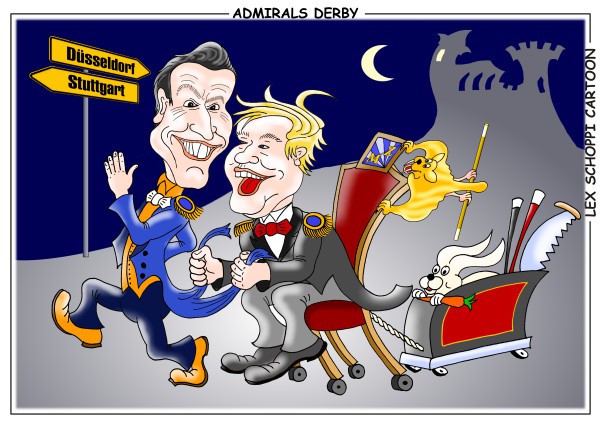 If we trust in statements from sideline guests, the first board meeting of the Magic Circle Germany inquired into the whereabouts of the presidents throne. Up to now, nobody knew if it really existed.

Thus the president and his vice went to search for the holy Grail in the dead of the night.

Hieing back the Circles admiralty got caught in a radar trap, which brought us this cartoon.
As we can see on the radar picture bat Magica was with them and assured the sanctuaries of the “S”-presidents: Schroeders rabbit, Schreibers half saw and Sommers canes…
The throne is under way to the new Presidential Palace. Its construction will be covered in detail in one of my next cartoons. Please visit us again…

* Schroeder, Schreiber and Sommer have been presidents of the Magic Circle. Magica is the trophy of the German Magic Championship. She is supposed to represent an angel, but looks like a bat.