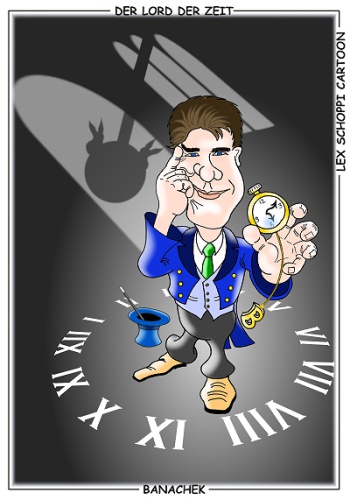 I call this figure
Lord of Time

Banachek, who lives in Texas today is by far the at most notable mental magician of the last decade.

Hardly any other has influenced mentalmagic like him. Amongst his greatest tricks there are telekinetic experiments. Thus using the power of the mind to cause the movement of matter at a distance.

He not only bends spoons just by looking at them like Uri Geller but also makes ball pens drop from the table. Words chosen from a book by the audience – by someone who usually does not read – are disclosed to him. One of his most famous illusions is the telekinetic movement of the hands of someone else’s wrist watch exactly the number of minutes the owner desires.

I have painted Banachek in his typical thinker’s pose, dressed in blue and green which was characteristic for him back then. Showing his best illusion – stopping time. I provided him with a proper tail for sure. Thanks to his lovely hairstyle he escaped from wearing a tophat. Otherwise he gets in bad trouble with his hairdresser. But even the greatest mentalist cannot come off with me without the rabbit.

This cartoon has been published in the trade magazine „Magische Welt“
5/2010. Find a full page ready to cut it out so that you can hang it up over your bed or behind the wall clock.